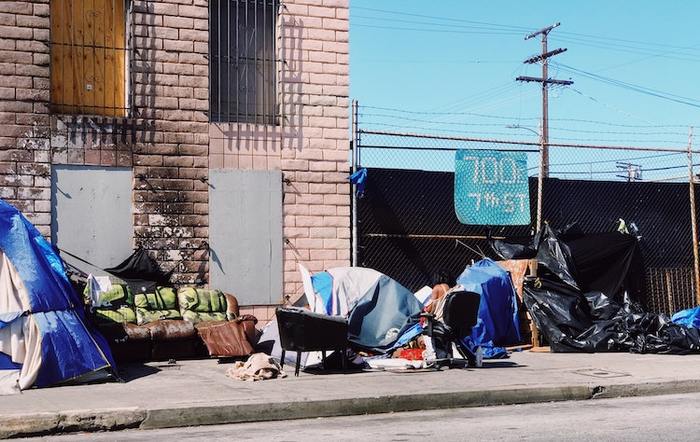 Returning to civilian life after the service in the military is a challenge every veteran must face. In many cases, this challenge is added to with both physical and psychological wounds – the legacy of the warfare experience.

One of the recent investigations into issues facing veterans and military families is the report produced by the Veterans Health Administration (VHA), which provided a number of alarming findings. For example, suicide rates among veterans continue to soar.

In this article, we are going to discuss the findings of this report and identify critical issues facing veterans along with helpful resources.

The first and most critical problem is suicide. According to the aforementioned report by the VHA, the suicide rate among both female and male veterans significantly exceeds the rate of the general population. For example, suicide rates per 100,000 among male VHA users and U.S. males show a considerable difference: 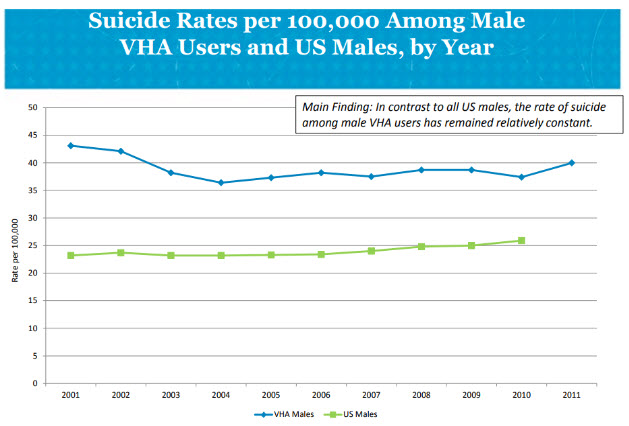 Similar findings were discovered in females. Although the rate of suicide among females remain lower than in males, veterans still commit more suicides than the general U.S. female population. These findings are shown in the graph below. 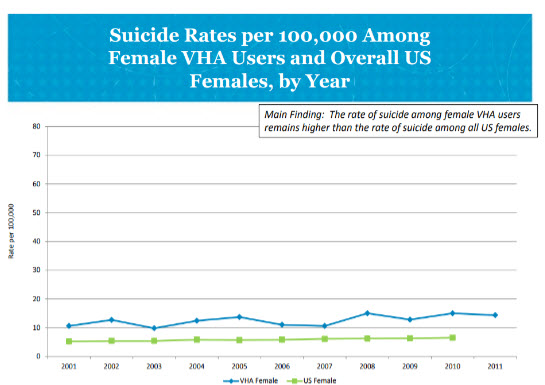 Many resources are available for veterans and their families to help them with coping in difficult situations.

They include:
 Veterans Crisis Line. Qualified and caring responders from the Department of Veterans Affairs are available for help using a confidential toll-free hotline, text, or online chat.
 National Suicide Prevention Lifeline. A 24/7, confidential, and free support and crisis and suicide prevention resources.

For most veterans, postwar life means loneliness. The people they served with focus on their civilian lives and don’t really have time for regular meetings. Establishing friendships with civilians is also very difficult because of the profound disconnect between the returning military personnel and civilians.

Some veterans join clubs and groups to feel a sense of belonging to a group. For example, they start writing courses and get essay tips from civilian writers. In some cases, they choose to create content for a living.

In most situations, however, veterans are lonely. That’s support groups play a critical role in solving the issue of loneliness. Here are the resources that help veterans to find much-needed help:

 Veterans of Modern Warfare. The mission of this organization is to provide education and information about veteran benefits, emotional support, healthcare, advocate veteran groups, and help with transition to civilian life.
 Vietnam Veterans of America. Assistance with getting veteran benefits and jobs, support groups, financial assistance, and community of Vietnam veterans.

According to the data provided by the National Coalition for Homeless Veterans, about 11 percent of the adult homeless population are veterans (see related data in the graph below). Many of them suffer from mental illness and/or substance abuse. Also, about 20 percent of veterans currently in substance abuse treatment facilities were homeless. 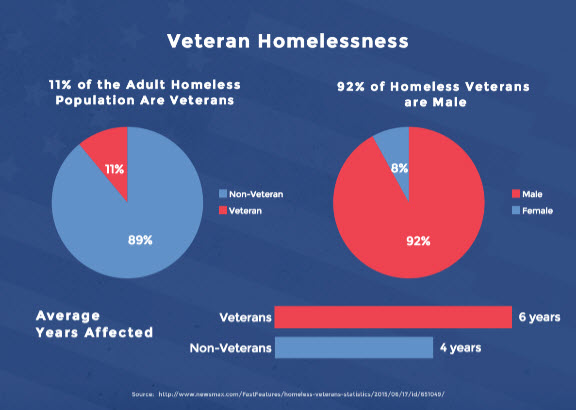 The problem of housing and homelessness is critical for veterans, so many organizations provide resources to help homeless veterans address their challenges, including:

Unfortunately, post-traumatic stress disorder (PSTD) is common among veterans. The experiences during warfare often have a profound psychological impact on them; for example, losses and fears of involvement in combat, injuries, relocations, and even sexual violence.

As the result, all that emotional pain continues to take a heavy toll on mental health. However, only one out of three veterans look for professional assistance.

The following resources could be helpful for veterans suffering from trauma and post-traumatic stress disorder:

 National Center for PTSD. Qualified help for veterans who have PSTD and their families.

According to the statistics provided by the National Coalition for Homeless Veterans, there were around 140,000 veterans held in state and federal prisons. They are 99 percent male and their median age (45) is older than of the general prison population (33).

There are more alarming facts: more than 50 percent of veterans commit violent crimes and they have longer average sentences than non-veterans.

Here are some commonly recommended resources:

 A Veteran’s Guide To Criminal Law. Provides helpful knowledge such as how to get an attorney, what to do if in the custody, and other explanations.
 U.S. Department of Veterans Affairs. Benefits and programs for incarcerated veterans and other information.

Civilian life can pose numerous challenges for veterans and other families. In many cases, it feels like another battle. Getting professional support is critically important for veterans because they might be facing serious issues that decrease the quality of their life.

About the author: Tom Jager is a professional blogger. He works at Proessaywriting. He has a degree in Law and English literature. Tom has written numerous articles/online journals.