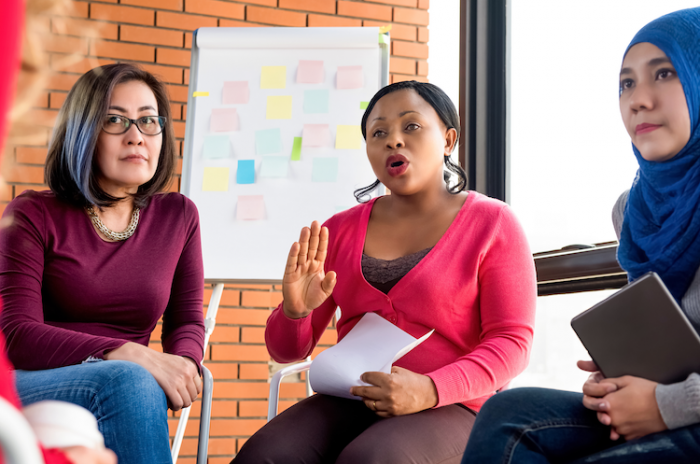 Most U.S. work environments these days are a melting pot of different races, nationalities, genders, sexual orientations, religious persuasions, education, age, and even language. Different backgrounds and circumstances can occasionally cause people to behave insensitively, hurting others even if it’s not intentional. By providing diversity training for workers, companies can help them understand and accept their differences, which promotes a positive work environment.

One of the most common methods organizations use to manage diversity in their teams is to arrange formal training for workers. Although research shows some of these programs are very effective, others appear to be less than successful. Two of the ways companies typically use for this kind of training are:

Perspective-taking: This method follows the principle of encouraging workers to try and put themselves in another person’s position. When staff were asked to write out sentences based on imagining the challenges someone from a racial minority or an LGBT group might face, it improved their attitudes towards people in that position. Even eight months later, when the group was revisited, the effects of seeing a situation from another’s perspective were still present. Happily, this didn’t only apply to the groups being studied, but the workers who had completed the exercise were generally more tolerant towards all groups.

Goal setting: Another method of training workers to be more inclusive of colleagues from different walks of life is to connect this to their job performance. When people realize their career success can depend on letting go of biased attitudes, they make a stronger effort to do so. In an example, employees set work goals relating to diversity such as challenging inappropriate comments when they occur. This was found to lead to more pro-diversity behavior in the three months following the goal-setting exercise. Attitudes were positively impacted up to nine months after the training.

How This Affects Veterans

Veteran employees in the workplace are not only often members of a particular minority group, they also often have distinctive political beliefs or suffer from some form of disability. Invisible disabilities like PTSD, depression and chronic pain can be just as isolating as a different religious perspective. In some cases, it’s more so because it is often kept hidden by the sufferer.

Having workers insensitively make jokes about issues that can trigger a veteran employee can create a negative workplace where tensions simmer just below the surface. Companies can enjoy a number of benefits from hiring veterans, in the form of federal and state-level incentives, so it’s in their interest to ensure they are positioned as a veteran-friendly employer.

Implementing It In Your Company

If you’re ready to start implementing some form of diversity training, it’s best to get expert input for the process. Many sensitivities are unknown to business leaders. The current proliferation of the “Incel” is an example. A self-professed Incel mowed down 10 people in Toronto in 2018, in an attempt to draw attention to his plight as an involuntarily celibate male. The idealogy may sound like a joke, but the result isn’t, and it’s important to make sure your company’s diversity training empowers employees to avoid insensitivities that can trigger someone with mental health issues.

Benefits Of Doing So

Companies enjoy multiple benefits of having effective diversity training in their workplace. They are more likely to attract and retain the best, most talented employees, and to create a positive environment for them to thrive in. The happier most workers are, the more inspired and productive they become, and increased performance makes a difference to the bottom line. The better the diversity training, too, the more accessible your company will be to your workforce. This means a wider pool of experience and knowledge available to tackle problems or develop opportunities, which widens the scope of the company’s way forward.

For companies interested in hiring veterans, it’s important that you make sure the diversity climate in your company is a positive one before you start creating a job description to attract top veteran candidates. Then you can confidently begin advertising jobs for veterans and recruiting the top talent your company deserves.